Things That Go Crunch in the Night. A Dog Story Revisited.

I wrote this a couple of years ago in an old blog. I thought I would repost it before it gets lost. Who doesn’t love a good ol’ dog story? Remember, dog spelled backwards is god. 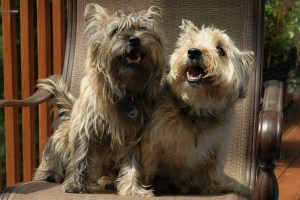 Knit, knit, purl – “Gosh, Hoover! Move your head! Chloe! Don’t bite my needles!” I was trying to knit with two little dogs in my lap, waiting for Bill to come home for dinner. Our Cairns Terriers had been alone all day, and would not be satisfied by merely lying next to me; they demanded to be worn.

Bill pulled up the road, and as his tires crunched over the loose gravel at the end of the drive, Hoover and Chloe leapt from my lap and took up their posts at the front door. They danced and writhed against the storm door, waiting impatiently for that moment I would release them from their confinement to dash down the porch steps and smother their human father in puppy kisses. I set down my knitting, and went to the door. Once Bill had made it as far as the mailbox at the bottom of the driveway, I loosed the dogs.

They charged down the drive, their short terrier legs pumping, feet barely touching the pavement. I watched them turn in perfect unison at the end of the drive and race toward their favorite man in the world. And run right past him. In stunned silence Bill and I watched them tear up the road toward the woods — two tiny, furry pieces of my heart — and disappear into the twilight.

Dashing back into the house, I slid my feet into my sneakers, grabbed leashes and dog treats, and set out up the road. I would have to try to track my two fast-moving earth dogs through the woods. I resolutely left the road and set off on the deer track winding through the dusky trees. I should have taken the flashlight.

Their relentless barking gave them away. Most of the dogs I’ve known, other than those bred for hunting, didn’t bark when they were on the chase. Dogs who had cornered their prey — THEY barked. This was not good. I wished in vain that they had treed a raccoon.

It was a black bear. A big one. And he appeared most unhappy at being unable to climb further into the tree out of which he was now peering, with both my stupid, fearless, little dogs barking and jumping and nipping at his clawed hind feet. At any second, that bear was going to tear my pets to shreds right before my eyes.

The dogs would not obey my call to come. They ignored me entirely, their laser focus intent only upon bringing down their quarry. I could not just walk up to them and click on their leashes, either. That was a big bear. A really big bear.

The bear looked up and huffed at me. One, big, “Hunph.” That was not good either. What do I do now? Without thinking, I immediately threw my arms up over my head and roared. “Rrrrrrr-R-R-Raaaarrrrhhhhh!” That got the dog’s attention.

Where on earth did that sound come from? Had I taken leave of my senses? Me? A fifty-year-old, out of shape woman, roaring at a 300-pound bear? Really, I must be crazy.

The bear must have thought so too, because at that suddenly-distracted-doggy moment, he plummeted out of the tree and took off. The dogs made chase. I stupidly followed, stumbling along over the crest of the ridge and down, branches grabbing at my clothes, still jingling the leashes and shaking the container of dog treats. I heard the crackle and crunch of leaves and twigs as three animals charged determinedly through the forest, and then… silence.

Nothing. They were gone.

The cold, stark reality of my situation sent an icy knife through my gut. I was alone and defenseless in the woods with a supremely pissed-off black bear on the loose. I knew these woods like the back of my hand in the daytime. Now fully dark, I could barely make out anything. Everything looked suddenly foreign, other-worldly. I wheeled around and nervously began stumbling back through the underbrush in the direction I believed was the way home, unable to make out the deer trail in the darkness. After a moment I heard Bill’s voice in the distance, alternately calling my name and then the dogs. I had left him standing in the road, so I followed the sound.

Walking back to our house never took as long as it did that night. Where were our dogs? Would the bear maul them, or would they dash out on the county road to be struck by a car? What of the foxes, bobcats and coyotes – would they have a turn at acquiring one of our pups for dinner?

We climbed the stairs, to stand expectantly on the front porch. I refused to go inside. That would be giving up, admitting defeat – giving the dogs over to the wilds to destroy. How could this be happening, only thirty miles from midtown Manhattan? Twenty minutes had gone by. Time seemed like an ever-widening chasm, a fissure in a glacier, slowly separating and pulling us further and further apart from the dogs.

I sank into one of the big white wicker chairs on the porch and cried. Big wet, salty tears – thinking I had seen my dogs for the last time. Bill jumped out of his chair, alternately pacing and staring up the road. “What was that?” he questioned. I was too miserable to notice.

The endless droning of cicadas and crickets stopped for a second; skipped a beat. Out in the darkness of the road, there was movement – a streaking gray blur – tearing down the road. It was Chloe! She ran up the driveway, and with all her youthful energy, leaped up into Bill’s open arms. Chloe! Sweet, sweet little girl, our monkey-faced dog with the shining eyes, was home.

Where was Hoover? Oh, my God. The bear must have gotten my old fella. He was older, and fatter than Chloe, and had a bad knee. He must not have been able to keep up. Our joy was shattered. They should have come home together. They are always together, like the two-headed dog of mythology.

Once again I set out up the road. Neither darkness nor wild beasts would keep my from my Hoover. I crested the hill at the end of our street and spied him – trotting happily along with his ears and tail pricked up – emerging from the brush at the end of the road. He was filthy, and never looked more alive than he did at that moment. “Hoover, where have you been?” He looked up at me with his ever-expressive face.

I am a beekeeper and organic gardener who is in the process of turning my renovated foreclosure property into a working farm. My etsy shop is located at www.leesbeesnj.etsy.com where you can buy honey, lip balm, creams, soaps and other cool stuff. Bee happy!
View all posts by Silver Spring Farm →
This entry was posted in Uncategorized and tagged bears, cairn terrier, dog story, dogs, runaway, woods. Bookmark the permalink.

3 Responses to Things That Go Crunch in the Night. A Dog Story Revisited.